Posted on January 12, 2015 by EasternPennPoints 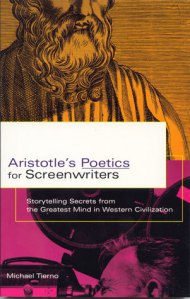 The title of this book may be somewhat misleading.  Author Michael Tierno uses popular movies (moving pictures) as story tools while he explains Aristotle’s writings on dramatic theory, ‘Poetics,’ in an easily digested book of 167 pages.  I purchased this book while studying the craft of screenwriting, and consider it a valuable writing resource.  Learning more about ‘Poetics’ helped me understand that every great story has a well-developed emotional landscape employed to move audiences to catharsis, “…where the audience releases their burden of pity and fear…”

The Godfather movie series is one of the many movie examples used in Tierno’s book.  Before it became a blockbuster movie directed by Francis Ford Coppola in 1972, The Godfather was a crime novel written by Mario Puzo published in 1969.  Tierno writes in chapter 5, which is titled, Plot Is Soul, “The key is to have the plot action connected to the deep desiring soul of your hero.” Michael Corleone’s deep desire was to protect his family.  If you’ve watched The Godfather movies you know Michael Corleone stopped at nothing to achieve his soul’s desire.

So what’s all this have to do with writing for children you ask.  Everything!  Children will be bored to tears with a book that TELLS a story and doesn’t MOVE them into the story.  If little Susie wants a pony, it has to be her soul’s desire!  So our plot action of‘Susie wants a pony’ = soul’s desire.  Now how is our sweet Susie going to impact the world around her to get a pony?  Tierno writes, “All action that brings change in the story must raise the central moral question.”  How can ‘Susie wants a pony’ = soul’s desire lead to a moral question?  Here’s your opportunity to impart some wisdom without preaching a sermon.  Perhaps Susie decides to borrow a neighbor’s pony for a ride to help her decide if she wants a pony like her neighbors.  The neighbor isn’t home so Susie decides there is no harm in going for a ride on her neighbor’s pony without asking permission.  We can use the action of Susie’s decision making (which is tied to her moral character, more on that soon) to create a learning experience for Susie in which she discovers that what she does not only affects her, but also affects the pony, a garden, laundry drying on a line outside, etc.

Tierno writes, “Tragedy is essentially an imitation not of persons but of action and life, of happiness and misery.  All human happiness or misery takes the form of action; the end aimed at is a certain kind of activity, not a quality… It is in our actions – what we do – that we are happy or the reverse.”

Harold and the Purple Crayon by Crockett Johnson uses the –what we do– in this case what Harold decides to do with his purple crayon ‘action’ to overcome all kinds of obstacles.  How encouraging to know you can conquer obstacles as they arise in your world with a purple crayon if you put your mind to it!  Hmm, I think I just found my 2015 resolution.

In Chapter 18, titled, Whatever Causes the Action Better Be Up There on the Screen, begins with the following quote from Aristotle’s Poetics:

“The tragic pleasure is that of pity and fear, and the poet has to produce it by a work of imitation; it is clear, therefore, that the causes [of the action that can arouse pity and fear] should be included in the incidents of his story.”

The best stories have well-developed characters, even children’s stories.  Consider the characters in the Peanuts comic strip created by Charles M. Schulz, and also the characters in The Winnie the Pooh series created by A. A. Milne.  Each of the characters created in these two series has a distinct personality, and their personalities drive their decision making.  We can relate to characters with distinct attitudes even if we don’t agree with them.  Plot should be something that evolves and revolves around your character’s personality which influences their soul’s desire that impacts their world and creates a moral question.  Yikes!

Tierno writes, “A plot must include causes of the action that can arouse the audience’s deepest pity and fear.  This means the audience must understand the hero’s thoughts and see those thoughts becoming actions, which in turn reveal a moral quality (character) of the hero.  This will help the audience to relate to the hero and feel empathy for him or her.”

I will add here that understanding an antagonist’s moral quality (character) may even help us relate to them and feel empathy for their moral shortcomings.  How the Grinch Stole Christmas by Dr. Seuss explains to the reader that the Grinch was born with a heart, “two sizes too small.”  However, upon hearing the Who’s singing a joyful song even after he accomplished stealing their Christmas, the Grinch’s heart grows three sizes larger and he returns to Whoville and restores their Christmas trimmings.

Tierno writes, “According to Aristotle, catharsis works best if everything in the story builds toward creating this one experience.”  This is what writing tight is all about, and since it’s January I’ll call this the ‘Snowball Effect.’  As you write, your emotional story builds, picking up everything in its path – including the reader.  As a reader I might be in for a fun ride or a scary ride, but I’m in, “In other words, you must keep catharsis in mind as you structure the plot of your screen play.”  Or picture book, YA novel etc.

I could go on, but will wrap it up with Aristotle: “The Plot in fact should be so framed that, even without seeing the things take place, he who simply hears the account of them shall be filled with horror and pity at the incidents….”

These are just a few of the many insightful tips garnered from Aristotle’s Poetics, laid out in an easily understood text by Michael Tierno. If you decide to read his book, I hope you will be inspired too.

3 Responses to Writer’s Toolbox: Aristotle’s Poetics for Screenwriters, a review by Jackie Dilworth