Posted on December 17, 2015 by EasternPennPoints 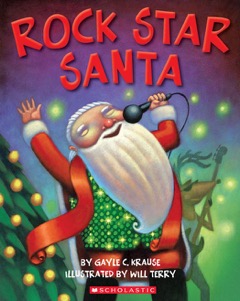 Teachers love them because they can be incorporated into their curriculum before the specific holiday, especially in childcare centers and nursery schools. In fact, ROCK STAR SANTA is being performed in Melbourne, Australia this year for a Kindergarten Christmas concert. Yay! He’s an international star!

But, as successful as ROCK STAR SANTA has been, I’ve written other holiday books that sit in a computer file, still homeless. Why?

Because holidays inspire more picture books than non-holidays, and though writing them is fun, the competition is fierce. Just wander through the Christmas/Halloween/Easter displays in a Barnes and Noble store. There are so many picture books, you can’t choose.

That means if you write one, you’re up against all these famous authors, or actors, or football players, or TV personalities. You get the picture.

So the best I can suggest is to write the tightest, most original picture book you can think of. (Not your 1st, 2nd, 3rd, or even 4th idea…….really stretch the boundaries).

Santa has already been at the beach, he’s conspired with Ninjas, and has been portrayed by almost every animal you can think of. Books already exist about Santa on the prairie or Santa working with Swedish tomtens (elves) or Santa in outer space. So what’s left?

Put your thinking cap on, or maybe a Santa hat, and an idea will come to you….just make sure it’s as original as it can be….like Santa being a rock star!!

#1 High concept – make your story exciting to kids. If your writing about a holiday, make it DIFFERENT – a robot Santa? A ballerina Witch? An alien Easter bunny?

I can’t tell you how many people think they can rhyme, but it isn’t easy. There’s so much more to writing rhyme than making end words sound the same.

Just this past year I served on the national “Best Rhyming Picture Book Committee” for 2015 and we judged over 50 published rhyming picture books to get down to one winner………and it wasn’t a holiday book…….

There was an Old Dragon Who Swallowed a Knight by my friend and fellow rhymer, Penny Parker Klosterman, was just awarded that honor last weekend at the first annual Rhyming Revolution Conference in New York City.

Editors see a lot of bad rhyme, mostly in the form of common rhyme, forced rhyme, and inconsistent meter. Make sure that’s not you.

Currently, picture book manuscripts should be around 500 words. Sometimes fewer words are preferred. Write tight to improve your odds of beating the slush pile.

1. illustrations will tell half your tale, so you don’t be overly descriptive.

2. for a picture book, writing well is not enough – you must have a unique hook that jumps out and grabs the reader.

Have a Merry Rockin’ Christmas!