Fall Philly Presentation: How to Improve Your Writing With Word Play, by Elizabeth Kann

Posted on November 7, 2016 by EasternPennPoints

“Language is a city to the building of which every human being brought a stone.”

Following my presentation How to Improve Your Writing With Word Play at the SCBWI Fall Philly Conference in Philadelphia, many people requested more information. So here is a list of definitions mentioned in my presentation, as well as examples of successful word play in books.

Good luck gobblefunking with words, as Roald Dahl would say. And may you have a frabjous day, as Lewis Carroll might say, full of chortles!

Celebritrees: Historic & Famous Trees of the World, written by Margi Preus and illustrated by Rebecca Gibbon, uses a witty blended word in the title, for example.

Neo Leo: The Ageless Ideas of Leonardo da Vinci by Gene Barretta is an example of a catchy book title with a rhyming reduplicative.

Spoonerisms: When the initial sounds of words are switched, producing a humorous result.

Malapropisms: Use of an incorrect word in place of the correct word with a similar sound.

Yogi Berra said, “Texas has a lot of electrical votes.”

Do Unto Otters: A Book About Manners by Laurie Keller is an example of a book title with a malapropism. Little Red Writing, written by Joan Holub and illustrated by Melissa Sweet, is another example. 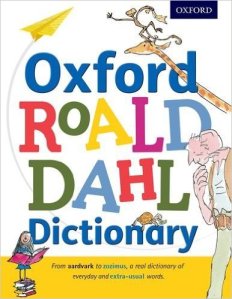 Wellerism: A proverb or saying, a speaker, and a humorous literal explanation, such as “So I see,” said the blind carpenter as she picked up her hammer and saw.

Tom Swiftly: A Tom Swiftly wellerism has a speaker attribution that puns on the quoted statement, as in “It’s freezing,” she said icily.

Palindromes: A word or phrase that is the same read backward and forwards, such as kayak or Madam I’m Adam.

See Mom and Dad Are Palindromes by Mark Shulman and Adam McCauley.

Pangram: A sentence that uses all the letters of the alphabet.

The most well-known pangram is: The quick brown fox jumps over a lazy dog.

Lipogram: When a writer omits a certain letter or group of letters, usually a common vowel such as the letter E.

Ambigram: A word or phrase that reads the same or differently when oriented in a different way, such as when rotated or reflected; for example, a doormat that reads: ‘Come In’ on arrival and ‘Go Away’ on leaving.

A picture book example is Ann and Nan Are Anagrams: A Mixed-Up Word Dilemma by Mark Shulman and Adam McCauley.

Calligram: A word or phrase or text arranged to form a picture of what is described.

Onomatopoeia: A word that sounds like its meaning, such as woof, woof.

Alliteration: A phrase of words that begin with the same sound, such as: Peter Piper picked a peck of pickled peppers.

Synecdoche: a literary device whereby a part refers to the whole or the other way around, such as wheels for car.

Metonymy: Like synecdoche but uses a different word to refer to the whole phrase, such as crown for power.

Homonyms: words that sound the same and are spelled the same but have different meanings, such as bow meaning the front of a ship and bow meaning to bend forward.

Homophones: words that sound the same but are spelled differently and have different meanings, such as tale and tail.

Dear Deer: A Book of Homophones by Gene Barretta is an example.

Homographs: words that are spelled the same but are pronounced differently with different meanings, such as minute and minute.

See Zoola Palooza A Book of Homographs by Gene Barretta.

Heteronyms: Homographs with different roots, such as refuse and refuse.

Acrostic Poems: A poem where the first, last, or other letters in a line spell out a particular word or phrase.

Rebus: A representation of words using pictures or symbols.

Eponyms: Words named after people, such as Yogiisms.

Feel free to share your favorite examples or books on word play in the comments below.

Elizabeth Kann, MD, MPH, is the co-author of the New York Times bestselling children’s picture books Pinkalicious and Purplicious and the co-playwright and co-lyricist of “Pinkalicious The Musical” which opened in New York City in 2007 and has played in numerous places around the country and internationally. Her humorous personal essays have appeared in a variety of books and publications. Her website and blog address is elizabethkann.com, and you can find her on Twitter at @ElizabethKann.

5 Responses to Fall Philly Presentation: How to Improve Your Writing With Word Play, by Elizabeth Kann