A Café Chat with Matt Phelan by Adrienne Wright

Posted on November 30, 2016 by EasternPennPoints

Good morning Matt, welcome to Eastern PennPoints Café. What would you like to drink?

A bucket of coffee, please.

Wow! Okay, would you like a pastry to go with it? Or maybe a big juicy red apple?

I’ll pass on the apple. No offense.

None taken.
Congratulations for making the Best Books of 2016 list by Publishers Weekly, and all the starred reviews you are getting for Snow White, a Graphic Novel. It’s a beautiful book.

Thank you very much.

I saw the reviews in Kirkus and The New York Times where your book is paired with Shaun Tan’s new book. That in itself is fabulous.

Like everyone in the world, I’ve admired Shaun Tan’s work for years. He’s fine company to be in, that’s for sure.

The setting, period and interpretation of Snow is brilliant. What made you choose brink of depression era New York?

It began as an exercise. I made the connection between the corner apple peddlers of the Depression and the stepmother from Snow White. From there, I brainstormed how other elements of the tale would translate into that time period. After I decided that the Seven Dwarves would be seven street kids, I started connecting with it as its own story. I wanted to know more about these characters. It started to take on a life of its own apart from the fairy tale. 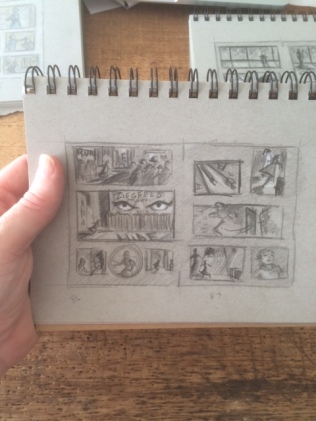 I don’t mean to gush, but one scene that literally took my breath away was the glass coffin. And you’ve managed to retain all the essential traits of all the characters. Do you have a favorite part of the story that you are particularly pleased with?

Connecting the Glass Coffin with Macy’s Window was one of those breakthrough moments in the early brainstorming. As far as favorites go, there is a chapter in the book where the Seven finally reveal their names to Snow White. That scene was a large reason for doing the book for me. Whenever I wavered or was unsure, I thought of that scene and plowed on.

I love the design of the book — it perfectly fits the era in which it is set. Did you have any input in the design, cover and typography?

Absolutely, but I have a lot of faith in the good judgment of my art director, Heather McGee at Candlewick Press. She’s designed all of my graphic novels. We talked a lot at the beginning about how the book itself as an object should look and feel. The cover design was mine, but the font choice (Mackintosh) was Heather’s idea. 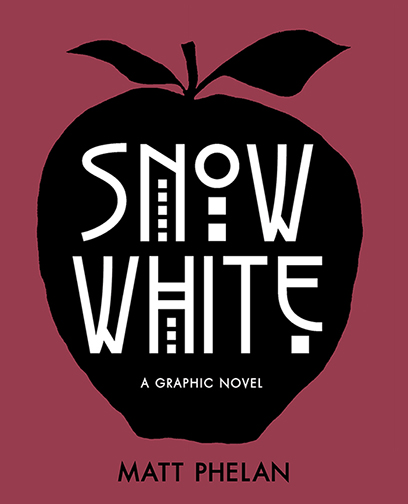 Your previous graphic novels are historical and this one is based on a fairy tale. What are the similarities, and differences in the processes for both?

I’ve always loved the past and how another time period can be so different than today but still be essentially the same. There is always friendship, jealousy, adventure no matter what the date. Snow White was in some ways similar to Around the World in that I was using certain set elements: the basic plot of the tale and the real events of three true stories. For all of the books, research is essential and critical for the details. But once I start to think of it as a story, the process is much the same.

What are the main differences in working on graphic novels and picture books?

I really do think of my graphic novels as picture books for older readers. The process is essentially the same. It starts with a manuscript (written by myself or another author in the case of picture books, my own script if it is a graphic novel). After the editing process is complete and the manuscript is as strong as possible, I begin with very loose, tiny thumbnail drawings. This is the stage where all of the major decisions are really made: the composition, the mood, and the panel sizes (in the case of GNs). The rough thumbnails are sketched again, developing the ideas but still keeping things pretty loose. The final art is drawn fresh, based on the sketches. For Snow White, I decided not to use a light-box for the art. I simply looked at the sketches and drew them again. This gave the art a freshness and energy that you can lose by using a light-box.

Do you have a preference, picture books or graphic novels?

My heart will always be with picture books. There is a true perfection in the simplicity of a beautiful picture book. That said, I love how the graphic novel allows me to tell a longer story, and play with mood and pacing over 200 pages. When it works, reading a GN can almost feel like a dream.

I first noticed your work when I saw the beautiful original cover illustration for The Higher Power of Lucky, Newbery award winning book written by Susan Patron. Did that put a spotlight on your work?

Absolutely. I had only done a few books by the time Lucky came out, and I guess that book helped me get noticed by other publishers and authors overnight. I know Jeanne Birdsall suggested me for Flora’s Very Windy Day based on the cover of Lucky alone.

I love Flora! Your spontaneous, gestural line work really comes through in her windswept ‘poses.’
How did you get your start in children’s book illustration and writing?

All through my twenties, if asked what my dream job would be, I would always answer “children’s book illustrator.” I was working in bookstores at that time and was just blown away by the picture books that were coming out. I think The Gardener by Sarah Stewart and David Small really tipped the scale for me. Knowing that my drawing wasn’t up to snuff, I spent about five years making a portfolio. Convinced that I would never be satisfied with the portfolio, I knew I had to just stop at some point and show it to someone. I signed up for a portfolio review at the Eastern PA SCBWI Fall Philly Conference (2003) and was assigned an art director from Simon & Schuster. She liked my work, shared it with Dick Jackson, and I was hired to illustrate The New Girl… and Me by Jacqui Robbins. That led to another book at Atheneum and then I started working with other publishers. I haven’t stopped since.

Which artists and illustrators do you admire and have influenced your work?

There are so many. I’ll write out a few with the caveat that I am missing some. Inspiration from the past: Ernest Shepard, Daumier, Hiroshige (particularly his sketchbooks), Heinrich Kley, Tyrus Wong, Marc Simont, Charles Schulz, Bill Watterson, N.C. Wyeth, Robert Lawson. And there are so many illustrators working today that I admire that I really can’t list them all. Some of them are definitely: Lisbeth Zwerger, Helen Oxenberry, David Small, Holly Hobbie, Brian Floca, LeUyen Pham, Sophie Blackall, Melissa Sweet, Kelly Murphy, Marla Frazee, Frank Dormer, and on and on.

Graphic novels are fast becoming more “mainstream” in literature. March, Book 3 just won the National Book Award. What are some of the graphic novels that impress you?

I wasn’t the least bit surprised that David Small’s graphic memoir Stitches was brilliant. Ben Hatke (Zita the Space Girl, Mighty Jack) has that rare gift of getting real emotion into seemingly simple drawings. El Deafo by Cece Bell is wonderful. On the more adult side, I was very impressed with the storytelling in Matt Kindt’s Red-Handed.

What’s next up in your studio, or is it secret?

I’ve spent this past year working on picture books. The next one to be published is What Are You Waiting For? by Scott Menchin, from Neal Porter Books. My next book as author and illustrator is a picture book called Pignic, which will be out in 2018 from Greenwillow.

We wish you continued success with Snow. Thanks for visiting the café and come back soon.

To learn more about Matt, visit his website at http://www.mattphelan.com

Adrienne Wright is the Illustrator Coordinator for Eastern PA SCBWI. Please visit her at http://www.adriennewright.com/  and follow her on Twitter @adiillustrate